Here’s something we didn't think we’d be saying this year… Limes End Cottage now has its own beehive!

A couple of months ago we saw Monty Don’s new top bar hive on Gardeners’ World (compulsory Friday night TV for budding smallholders) and wondered whether we should add some bees to our growing menagerie. Keeping several thousand stinging insects was quite a different prospect to everything we’ve done so far, but we were intrigued by the possible benefits that it could bring – not only for us but the bees as well. After some intensive research we got in touch with the secretary of our local beekeeping association who was very helpful in answering our beginner questions and arranged some hands-on experience at one of his apiaries. Coming away without being stung, and not being overwhelmed by working in an environment containing hundreds of flying bees, we decided to take the plunge and order our own hive.

We soon learned that there are several different types of hive to choose from. After considering a few, including a national hive (the most common type in the UK), we decided to follow Monty’s example and go with a top bar hive. Top bar hives typically produce less honey for the beekeeper than other hive types, but their design has several advantaged, including allowing the bees to build their comb naturally without the use of man-made foundation frames. Bees kept in top bar hives also tend to be more placid during inspections as only a small part of the hive is open to the elements at any one time. Compare this to a national hive, where the whole colony is exposed to the elements as soon as the roof is lifted off and you can see why the bees might be less on edge in a top bar hive.

If you’d like to know more about top bar hives then we can recommend reading The Thinking Beekeeper by Christy Hemenway. 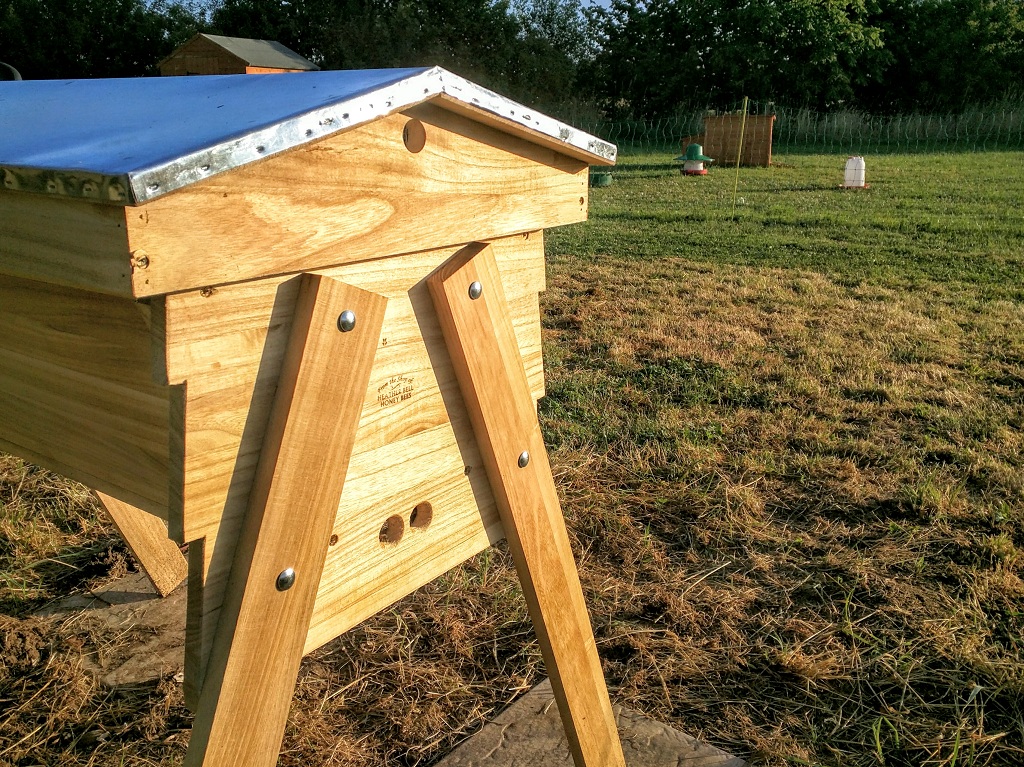 Fast forward a few weeks to mid-July and, after collecting our bees in a nucleus hive (our Land Rover has never been driven so slowly round the lanes than on the careful drive back), we put them near one of our field hedges (for shelter) and left them to orientate themselves in their new environment. All seemed well, so our beekeeping friend arrived a couple of days later to help us move the bees out of the nucleus and into the top bar hive. Whilst this was a little unnerving at first, everything went smoothly – we even managed to find and mark the queen. The photo below is of our queen in the marking cage just after we’d dabbed her with a spot of blue marker paint.

The weather has been a little mixed over the last week but a quick hive inspection on Tuesday evening revealed that the bees seem to be doing well. Since moving in they’ve made good progress drawing out two new bars of comb and the queen was still present, which is always a reassuring sign. We still have plenty of plants in flower in the garden and loads of clover out in the field, all of which should be providing a good sources of nectar. Our only job now is to ensure the colony remains well fed through the rest of the summer and into autumn when those nectar sources start to dry up. If you’re wondering how exactly to go about feeding bees then stay tuned as we’ll cover that in a future post.