After a week of snow and frost it seems as though we’re back to the combination of mild and wet weather that’s been the backdrop to most of the winter so far. On the upside, with daytime temperatures reaching 12°c last weekend we were able to do a bit of winter beekeeping which will hopefully guarantee that our bees will survive until they can start to collect nectar in the spring.

It’s worth pointing out that bees are normally best left to their own devices over the winter, but the mild weather we’ve been having has forced our hand a bit. Whilst there’s very little risk of the bees starving because it's too cold for them to reach their honey stores, they've been able to fly more which means that they're using up their stores more quickly at a time when there’s very little nectar around. As the weeks have gone I’ve therefore started to grow increasingly worried that they'll use up their stores, to the point where it seemed best to be on the safe side and provide them with some extra feed.

Since getting our bees last year we’ve only fed them on sugar syrup from a rapid feeder. For winter feeding we learnt that it’s necessary to use bee fondant as the bees won't readily take syrup because it’s too liquid and so raises the moisture level in the hive. When trying to feed fondant however we ran into a slight problem – in a standard hive the fondant container is simply turned upside on the crown board (which has holes in it). In a top bar hive all of the top bars fit together with no gaps in between so the fondant either has to be placed underneath the top bars near to where the bees have clustered, or else placed on top of the bars with some form of access being added. Not wanting to open up the inside of the hive to the elements I decided to go for the latter approach and drilled a couple of holes through a spare bar before putting the fondant on top.

Finding a bar close to where the bees were clustered underneath I started to slide it off the top of the hive, replacing it with the bar with the holes in. At this point things got very interesting as the bees were quite grumpy and started pouring out of the holes before I could get the container of fondant over the top. One bee sting, a quick retreat, and few minutes later I returned fully suited-up and finished the job. The photo below shows the fondant container on top of the bars of the hive – if you look carefully you can see the drill holes that allow the bees to come up from the hive body and get to the fondant. After taking the photo I fixed the container in place with some tape to stop it sliding around, then put the straw insulation and finally the hive roof back into place. 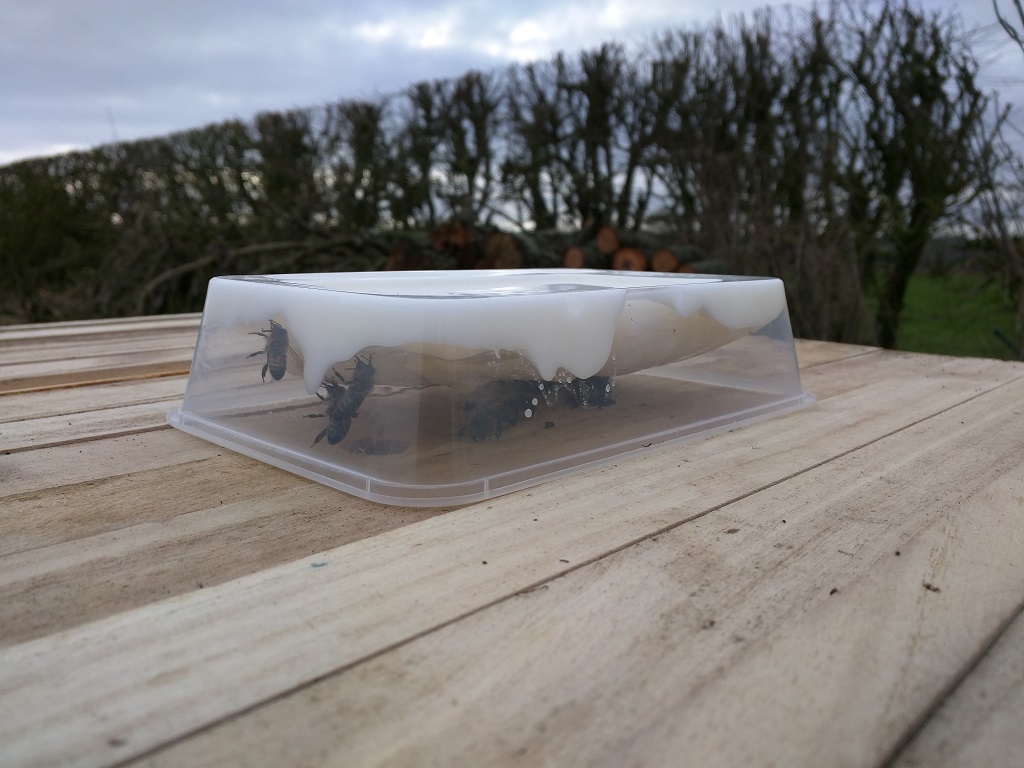 The weather forecast for this weekend is looking pretty mild again so I’ll probably take a quick look to check how much fondant is left. Once the spring arrives it will be necessary to replace the top bar with the holes in it with a solid bar, or else move it to a spare part of the hive and put corks in the holes to stop the bees getting into the roof space of the hive. It seems to be working well for now though.